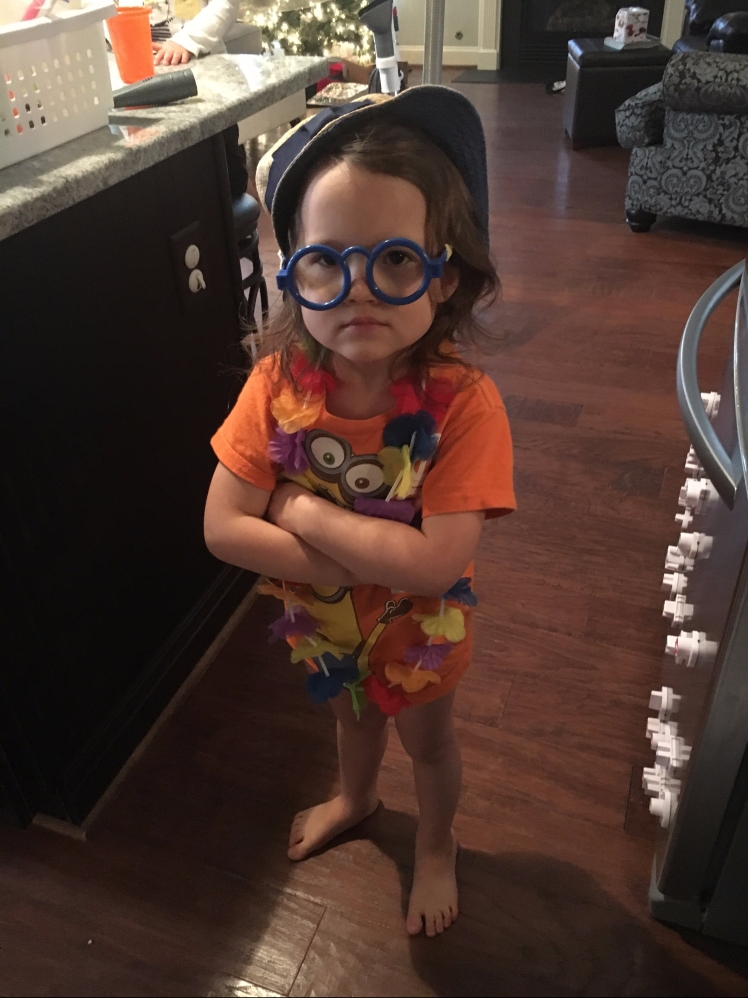 This is Ellie. She is now 4 years old and was 2 when this all started. This picture oozes personality…..and that is indeed her personality. I think that is probably about how I look when I am waiting on something, and well, I am tired of waiting.

Have you ever been waiting for something and you think it’s coming and then nope! So you wait some more, think it’s around the corner…..nope again. Well that’s how I feel. I feel like healing has been just barely escaping my grasp since almost exactly 1 year ago. One year ago, the middle of May 2016 was when I was finishing up my so-called final consolidation round of chemo. The consolidation rounds were 3 full rounds of chemo (2 weeks each) that were to ensure we got all of the cancer, even after my Hcg was back to 0. For reference, a normal Hcg in women is anything less than 5.

As I look back on that time, I remember getting really emotional for the first time since I was first told that I had cancer. I was getting better! We were seeing the light at the end of this dark tunnel. So, why was I so sad? As I sat there crying during one of my final inpatient stays of this phase, I felt as if I didn’t know how to do it. I didn’t know how to go back to “normal life”. I wasn’t confident that I remembered how to do anything but just be a patient. When we were hit with this freight train, immediate survival mode set in. I turned it all off. I cut off the blood supply to my extremities so as to shunt blood where it was most needed. I was forced in an instant to stop being the productive, wife, mother and nurse practitioner that I had been and to instead, just be a patient. In a sense, to give up my body and just to receive treatment, receive meals and cleaning help, receive healing in whatever form Jesus was going to bring it.

So now how do I turn it back on? How do I go from being nothing to being everything I was in my life prior to now? The answer….you don’t! God blessed me with a picture in my mind during that time. He showed me the garage at our house where our breaker box is. He showed me how when the freight train hit I figuratively went to the breaker box and turned every single one off except 1, simply to live, to take breath in and out. He then showed me how I didn’t need to go in there and turn every breaker back on immediately. Why? He would do it for me, one at a time, as I was readily leaning on Him. Once again, in my own strength, I had no strength. In His strength though, I had strength upon strength. I didn’t have to worry about turning all the breakers back on at all, because I was never meant to carry that weight without Jesus in the first place! There were too many places prior to cancer that I was carrying on my own. Too many things I was doing simply out of rhythm. Never asking Him for help. Never asking Him whether or not I should be doing that “thing” in the first place! He took my fears and traded them in for freedom. How freeing to know that the only things I had to do, He had already supplied all the grace for.  Deuteronomy 12:32 “Everything that I command you, you shall be careful to do. You shall not add to it or take from it.” Doing things, even good things, that God had not called me to do was just as much sin as not doing things I know He had called me to do. He tells us over and over that His grace is sufficient and that His burden is light; and it is! It totally is…when we are doing only what He has called us to do.

So back to the waiting….I am still waiting for complete healing, but throughout the process, healing has come in so many ways. We are so often about the end product of a process when God is all about the process itself. He is more concerned with how we get there than when. So in the waiting, I choose to rely on Him. He knows. He sees. He has not forgotten.

3 thoughts on “When You’re Waiting”

My name is Ferris. I am a follower of Jesus, wife to an amazing man, mom to 3 joyous kids, nurse practitioner, runner, and cancer fighter...I would say survivor, but the fight lives on. The beauty is, my Savior has already won the victory, this is just me walking out the process, my story, and the amazing things I am learning through it all.